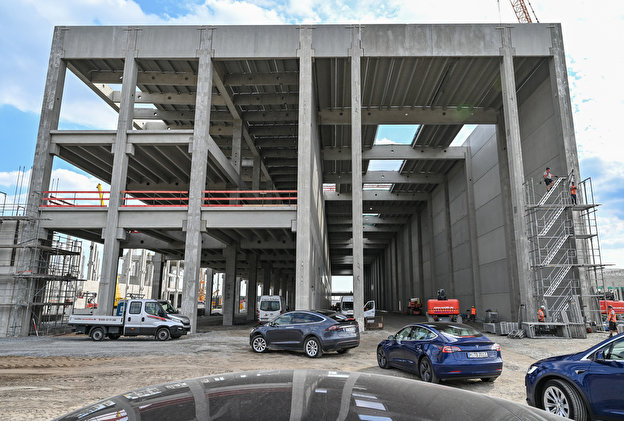 Tesla factory building: first facade of production hall is up

By: Dana Yopp
In: Business Marketing, Business News
With: 0 Comments
A first permanent facade on the drive production – according to Tesla the heart of the factory – has already been erected, the piles for the press shop are in the ground, the dimensions of the planned paint shop and the assembly hall with entrance area are becoming clear. During an information trip led by a Tesla team over the 300 hectare site, a spokesman explained the status of the construction project.
About 250,000 cubic meters of sand were dredged on the site. A large part of it was temporarily stored in the Jänschwalde opencast mine in Lusatia. Thoralf Schirmer, spokesman for the energy company Leag, explained that it will later be used as recultivation material for the use of post-mining landscapes.

Starting in summer 2021, up to 500,000 vehicles per year are to be produced in Grünheide (Oder-Spree), for which around 12,000 jobs are planned. The final environmental approval from the state of Brandenburg is still pending. Tesla is already building at its own risk via early approvals. The Brandenburg State Environment Agency recently gave the green light for the foundation and the shell construction with an early start.

Critics see, among other things, the public supply of drinking water because of the settlement in danger, but also criticize the clearing and the handling of animals on the site. The company now wants to reduce water consumption. Tesla claims that it needs 1.4 million cubic meters of water per year. “The water is there, it just has to come here,” said the company spokesman. That is technically solvable.

Objections will be discussed publicly on September 23

The citizens’ numerous objections to the planned construction of the “Gigafactory” will be discussed on September 23 at a public hearing in the town hall of Erkner (Oder-Spree). «We are very happy that this date exists. Simply because it gives us the opportunity to respond to the objections in a very fact-based manner (…) and also to take these concerns away from people, “said the Tesla spokesman.

Tesla is looking for workers

The US electric car manufacturer sees the rapid recruitment of workers as the greatest challenge. Tesla is confident there, said the spokesman. The company offers well-paid work and has good pay systems. The need for employees will grow with it, but first the market has to be there and the cars have to be sold
2020-05-16
Previous Post: Investments: EU companies are demanding concessions from china
Next Post: Slightly more women in management levels in public companies